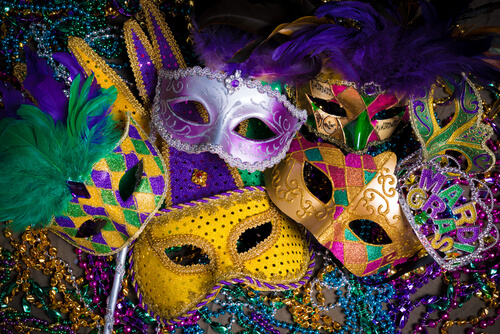 Celebrate Mardi Gras At Home With These Traditional Dishes

You can celebrate Mardi Gras at home with the famous traditional Louisiana dishes. Whether you’ve visited New Orleans during carnival season or not, there is a lot to learn about the party leading up to Fat Tuesday. Read up on some of the most fascinating history, trivia, and fun Mardi Gras facts before you “Laissez Les Bon Temps Rouler.” Plus, get our most festive Mardi Gras recipes!

You’ll hear “Laissez Les Bon Temps Rouler” over and over again at Mardi Gras parties. It means “let the good times roll” in Cajun French. We can get behind that idea!

In New Orleans, Carnival season starts on Epiphany, also called Three Kings Day. Many smaller parades are hosted leading up to the 12-day parading period. But the past five days comprise the most important weekend (from Thursday night until the dawn of fat Tuesday) when the biggest parades run back-to-back

Each Parade is Driven By a Different Krewe

While some krewes are hosting Mardi Gras parades for many years, others have formed more recently. Most are named after Greek or Roman mythology.

Some are easy to join through an application, while others have a long wait for lists to get in. You will likely need to spend a small change, regardless, since these private organizations charge annual memberships. 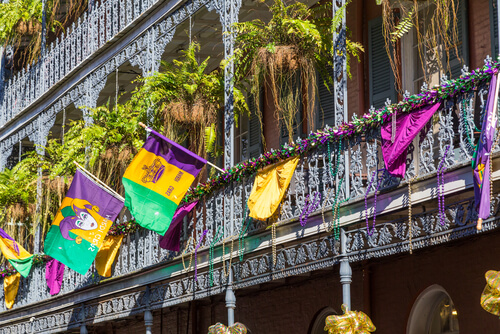 Is It Illegal to Not Wear a Mask Onboard Afloat?

It is not just a tradition–it is the law! Everybody on the float should wear a mask or paint their face. The practice was initially established years ago to encourage people to mingle and speak to those outside of their social circle.

Each float in a Mardi Gras parade is adorned differently to fit a central motif, from literature to comedy. And they do not waste any time getting to work: Many start on the subsequent year’s floats when Fat Tuesday is finished.

As floats pass by and watch as krewe members happily throw you toys and beads.

The Mardi Gras colors are gold, green, and purple–and each have hidden meanings. Green represents faith, gold represents power, and purple is justice.

Mardi Gras has rarely been canceled in New Orleans. While rain delays are common, the event has just been canceled a couple of times, like during both World Wars, the epidemic of Yellow Fever in the 1870s, and this season due to Covid-19.

That’s why we wanted to dedicate this month’s article to an At-Home Mardi Grass so that you can celebrate the season with your loved ones and remember the great times.

The King Cake is a sign that carnival season has arrived. During Mardi Gras season in New Orleans, king cakes are omnipresent. Each pastry is hiding a small plastic baby inside–tradition holds that in the case you discover the baby within your piece of cake, you’re going to be bringing king cake to another gathering.

The most popular beverage with visitors to the French Quarter might just be the sweet red Hurricane, garnished with big old cherry and a juicy orange piece. This local libation was made with rum in Pat O’Brien’s pub during World War II when whiskey was hard to find. The drink’s name came from the glass it is served in that looks like a hurricane lamp. 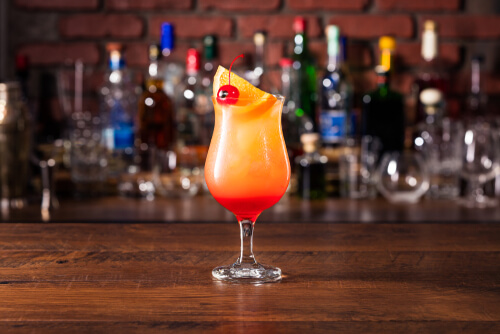 A perfect place to sip a Hurricane remains in Pat O’s mythical courtyard, overlooking the flaming fountain. You can find them elsewhere around town also, and many bartenders will be happy to combine you. Also, try the frozen varieties at drive-thru daiquiri stands and at the French Market.

How to Make a Hurricane Cocktail

Whether you decide to make one from scratch or use the mixture, Hurricanes are a tasty cocktail to whip up at home.

Blend all ingredients in a cocktail blender with ice and pour into a hurricane glass filled with ice. Garnish with a cherry and an orange slice.

Mix ingredients and pour into 26 oz. A glass with crushed ice. Garnish with a cherry and a slice of orange.

Over the decades, jambalaya has taken on a large number of identities in South Louisiana. The traditional New Orleans dish with ham and shrimp is one of the “reddish ” jambalayas due to the existence of tomatoes in it.  This jambalaya is also known as creole jambalaya (see recipe below).  Needless to say, you can find mixes in your supermarket of Zatarain’s jambalaya mix that works when you’re in a time crunch. Making jambalaya from scratch is the greatest.

Many of the Cajun communities to the west of New Orleans, eat what is known as the ” brown” jambalayas (no tomatoes!), with giblets, oysters, and smoked country sausages.  Both versions are delicious so try them both! 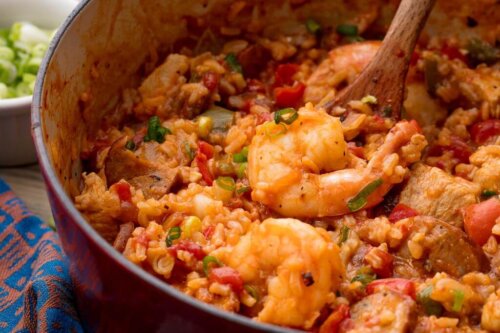 Over medium-high heat, melt the butter in a big non-reactive saucepan or Dutch oven. Add the sausage and pickled ham or pork and cook until all the fat is rendered from the meats, about five minutes, stirring occasionally.

Insert the yellow onions, the white portion of the green onions, and the sweet peppers. Cook the vegetables about five minutes or until they are clear, often stirring and scraping the pan bottom clean. Add the tomato purée, crushed tomatoes, garlic, table salt, bay leaf, cayenne, black pepper, and thyme. Cook and stir this base sauce for about two minutes.

Mix in the chicken stock and pepper sauce to the bottom and bring to a boil. Reduce the heat to keep a strong simmer, and simmer the liquid found until it’s reduced by one-third, around one hour 15 minutes. Skim any coagulates or foam while they grow on the surface. Again, turn the mixture to a boil and mix in the rice.

Lower the heat to moderate, and cook opened until the rice is just short of being done (should still be a small firm in the middle), about 25 minutes, stirring occasionally.

Add the fish and cook till the rice is soft and the shrimp become bright pink, about 3 minutes. Do not overcook. Stir in the green portion of the green onions.

Prepare Sausage & Shrimp Gumbo With Rice On The Side 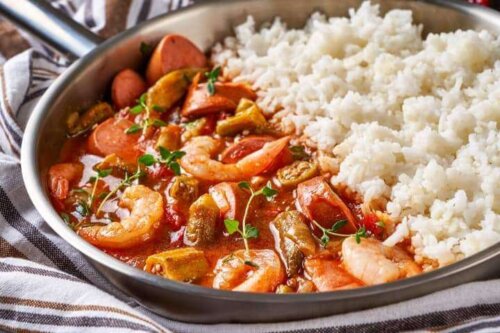 Heat the oil in a heavy bottom pot over medium-high heat or a large dutch oven.

Whisk in the flour until smooth and combined. Switch to a wooden spoon and always stir for 15-22 minutes or until the roux darkens to just past a profound fried butter color. Don’t let the roux burn! (if you smell it burning, you’ll have to throw us out, clean the pot, and begin. Unfortunately, there is just no rescue burnt roux!)

When the roux attains that deep rich brown color, stir in the bell peppers, onions, zucchini, celery, and squash and continue to cook, stirring as necessary so the vegetables do not stick. Approximately 8-10 minutes or until the veggies soften.

Add the garlic, bay leaves, and andouille sausage. Keep cooking for an additional 1-2 minutes until the garlic is aromatic and nice.

Add the tabasco sauce, Cajun seasoning, and cayenne together with the chicken broth and stewed tomatoes and bring to a high simmer before reducing the heat to medium-low, covering and simmer for 15-20 minutes.

Add the shrimp into the gumbo, give it a stir, and continue to simmer for an additional 10-15 minutes or until the fish is opaque and the veggies have softened. Taste and season with salt and pepper as desired.

You can serve it now or allow it to continue to simmer on low, occasionally stirring until you’re ready to serve. It only gets better with time.

Mardi Gras King Cake, a Brioche or sweet roll dough is roasted, roasted in a circle, and adorned with icing and gold, purple, and green sugars. A crown-shaped cinnamon roll, all ready for a party. 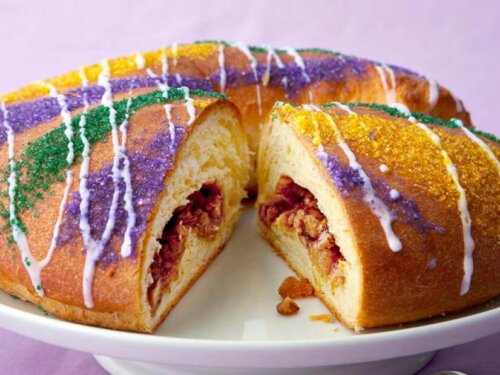 Mix 2 1/2 cups flour and yeast in a mixing bowl, using the paddle attachment, on low for approximately 30 seconds.

Heat sugar, milk, and salt in a small saucepan over moderate heat until sugar is dissolved and milk is between 120º to 130º.

With the mixer on low, pour in liquids and mix until incorporated. Add eggs one at a time. Keep on mixing until a rough dough forms.

Clean off the paddle and change to the dough hook. Mix in the left 1 cup flour a bit at a time, adding less or more flour as required to make a soft dough.

Add the softened butter slightly while kneading until every slice of butter is absorbed. Knead for eight minutes. The dough should entirely clear the sides of the bowl. If it’s too sticky, add extra flour 1 tablespoon at a time, stirring in thoroughly before deciding if more flour is needed. If the dough appears too dry, spritz with water from a spray bottle a few times, mixing in thoroughly before deciding if more water is required. Every 2 minutes, pause the machine, scrape the dough off the hook, and continue kneading.

While the dough is chilling, prepare the cinnamon filling. Mix the brown sugar and ground cinnamon. Blend butter with cinnamon mixture and blend well.

Roll the cold dough into a 10 x 20-inch rectangle. Spread the filling on half of the long side of the dough. Fold the dough in half, covering the filling. Pat dough down strongly so the dough will stick together.

Gently stretch the braid so that it measures 20 inches again. Shape it into a circle/oval and press the edges together. If wanted, hide the mini plastic baby between the ends of the ring before sealing it together in a ring. (You may also make a slit at the base of the cake and place the baby in after the cake is baked.)

Transfer the ring into a parchment-lined or greased baking sheet. Cover the dough with plastic wrap and allow it to rise until doubled, about 1 hour.

While the dough is increasing, preheat the oven to 350º. Bake the cake until it’s golden brown, 20–35 minutes. (It should feel hard to the touch and have an internal temperature of approximately 190°.) Remove from oven and allow cool 10 minutes on a baking sheet and place it onto a cooling rack to cool completely before icing.

Icing: In a small bowl, combine milk, powdered sugar, and vanilla till smooth (add extra milk if the mixture is too dense or powdered sugar if extremely thin). Spoon icing over the top of the cake. Instantly sprinkle on colored sugar, changing between the three colors. 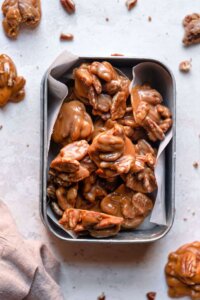 Check Out What Appliances Are “Made In America”

Try Regional Wines Made In America For An Exceptional Value

This site uses Akismet to reduce spam. Learn how your comment data is processed.